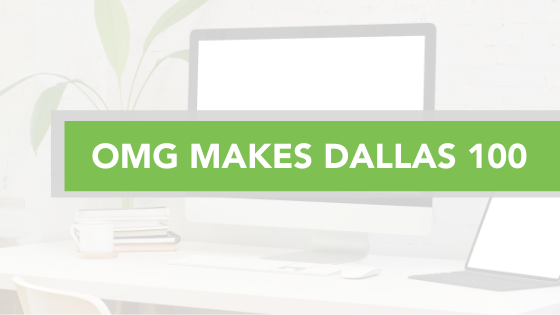 DALLAS, TX: October 29, 2017- OrderMyGear has been named a 2017 Dallas 100™ company. The Dallas 100™ is an annual event that identifies and honors the 100 fastest- growing privately held companies in the Dallas area.

The Cox School’s Caruth Institute for Entrepreneurship ranks the top 100 Dallas entrepreneurial companies annually based on percentage growth and absolute dollar growth over the previous three years. The Institute, working with the accounting firm BKD LLP CPA and Advisors examined sales from hundreds of companies from 2014 to 2016. The winners represent a broad spectrum of Dallas-area businesses.

The ranking of the top 100 fastest-growing companies will be revealed at the awards ceremony. This event recognizes fast-growing privately held corporations, proprietorships or partnerships headquartered in the Dallas area that often don’t get attention, but which have created jobs and generated wealth for their founders and employees and dramatically enhanced the area economy. According to Caruth Institute data, this year’s winning companies collectively generated billions of dollars in sales over just the past three years.

Stated by Jerry White, the Linda A. and Kenneth R. Morris Endowed Director of the Caruth Institute for Entrepreneurship, “The entrepreneurial spirit that drives these companies helps make Dallas a dynamic city for business. We feel it’s only right to shine the spotlight on their hard work and the contributions they make to our economy.”

OrderMyGear is the industry leader for online team and group stores and group ordering. OrderMyGear works with teams, sporting good dealers, screen decorators, leagues, distributors, and manufactures to streamline the process of group ordering for gear, equipment, and apparel. This e-commerce platform is the first software company of its kind and it was founded specifically for the team sales industry. OrderMyGear continues to be the gold standard or quality and customer service in the rapidly growing and continuously changing sporting goods industry.